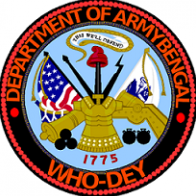 Dalton to IR and Savage Signed

By ArmyBengal, November 26, 2018 in Cincinnati Bengals